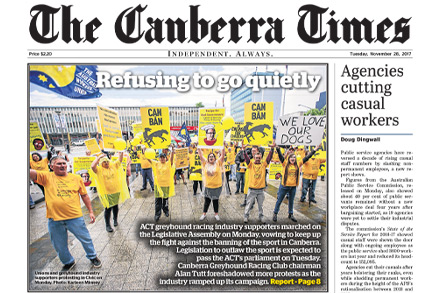 We completely changed the public and political conversation about greyhound racing and its proposed ban in the ACT and NSW.

We secured compensation was delivered to greyhound owners, trainers and industry employees, after a ban in NSW and ACT was abruptly announced.

Kel Watt spearheaded an ambitious guerrilla-style campaign to change overwhelmingly negative views in media & the community, driven by events in other states. Kel secured support from employee unions to strongly advocate for local employees. He was also closely involved in negotiations with Greyhounds Australasia to improve governance, integrity and animal welfare nationally.

While the campaign to retain the NSW industry was won, vital concessions were secured for the ACT industry where crossbench political dealing led to its closure.

Our approach successfully placed pressure on ACT Ministers to significantly delay the ban and provided an opportunity to negotiate a compensation package.